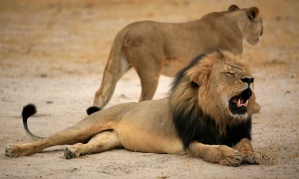 As long as I live, I will never understand how killing an animal just so you can chop off its head and mount it on your wall can be considered anything but barbaric. Some of you may have heard about the firestorm over the killing of Cecil the Lion in Zimbabwe by a trophy hunter from Minnesota, Dr. Walter Palmer.

The beloved lion of Hwange National Park in western Zimbabwe revered for his jet black mane, was lured out of the safety of the park, and only injured by the arrow from Dr. Palmer’s compound bow. Palmer and his guides tracked Cecil for about two days before he was killed with a gun, conservation officials said. He was beheaded and skinned, his corpse left to rot. So far the investigation has revealed that – contrary to what Dr. Palmer claims – there was no license for the hunt and it was ruled an illegal kill by Zimbabwe officials. Dr. Palmer’s guide and outfitter in Zimbabwe have been arrested and face charges of poaching. Authorities there and here want to speak to Dr. Palmer, who has thus far, not made himself available.

Palmer’s exploits in Africa and the US have been widely shared thanks to social media. And this isn’t his first run-in with the law over his hunting practices. He has a felony conviction stemming from a 2006 killing of a black bear in Wisconsin after lying to authorities about killing the bear outside of a legal hunting zone.

I can only hope that the death of this lion has shed much needed light on the barbaric “rich-man’s sport” of trophy hunting, but equally important, the exploitation of wildlife for “sport,” and the poaching and illegal ivory trade that threatens the very existence of many of the great icons in Africa and elsewhere. Extinction is forever.

Although I welcome comments on this post please know that all comments are moderated before they are posted. I ask that you keep them civil and on point.